New Orleans is known for beautiful, historic architecture, amazing restaurants, and top-notch music. It is also a place where you can let your hair down, loosen your tie, and discard”albeit temporarily ”your morals and judgment. A place where you can (to quote our own slogan) Let the good times roll! This rolling is almost always accompanied by alcohol.

There is certainly some truth in the portrayal of New Orleans as a city that emphasizes pleasure, though for residents, our good times are less about drinking to excess on Bourbon Street and more about drinking with friends and family. But still, our city’s designation as party central has remained a prime reason that millions of visitors make the journey down here every year. And for that alone, it is worth exploring why and how that reputation came to be. So before digging into a blog about the bars of New Orleans, it’s worth taking a moment to understand drinking in New Orleans”what it used to be like and what it’s like now.

Drinking in Yesterday’s New Orleans
The city’s drinking habits were impacted by three key influences: who settled here, the religions those people observed, and what life was like in the colony. A holy trinity of sources of drinking habits, if you will.
The city was founded in 1718, about the same time as the thirteen colonies were getting settled. Back in the eighteenth century, everyone drank alcohol; water made you sick, and booze didn’t. But while the New England colonies were settled by Protestants, New Orleans was settled by French Catholics, and these disparate groups had very different drinking habits. Protestants believe the fate of one’s immortal soul is entirely dependent on one’s actions, while Catholics are resigned to an endless cycle of sin, contrition, absolution, penance, and then (surprise!) more sin. Rinse and repeat.

Therefore, Puritans frowned on drunkenness while New Orleanian Catholics accepted and even embraced it. Jean-Jacques Blaise d’Abbadie, Governor of Louisiana in 1764, once complained to King Louis XIV that the entire colony is stupefied on tafia, which was a kind of low-grade rum Another reason for New Orleanians’ intemperate behavior stemmed from the kind of colonist who came here. Unlike New England, which was settled by many families seeking a new life, New Orleans was largely settled by convicts, smugglers, deserters, and prostitutes who were transported to the colony instead of being sent to prison. No one was happy to be here, and many had already developed habits of ill repute, stoked by crime and alcohol. To wit, when Louis Belcourt, Chevalier de Kerlerec, became governor of Louisiana in 1753, he was told to clean up the colony of its disreputable elements. He wrote to the king, saying, If I sent back all the bad characters, what would be left, of this colony’s inhabitants?

Finally, life was pretty miserable in southern Louisiana in the eighteenth century. There was no air conditioning, the mosquitos were legion, and food supplies from France were erratic. In contrast, liquor was reliable, easily obtainable from the Caribbean and, unlike most other foodstuffs, didn’t spoil. Thus, the stage was set for a city set in harsh conditions, receiving little support from the motherland, and settled by folks who were just trying to get through the day. Booze helped tremendously.

But New Orleanians’ drinking habits were not determined solely by these forces. For many New Orleanians, what they drank was connected with who they were. This very French attitude extended to the food they ate as well, and whenever possible, the colonists tried to eat and drink as they had back in France. New Orleanians’ reluctance to bow to an outsider’s dictate about what we could eat or drink is seen very clearly in 1768. The colony was taken over by Spain, and the King of Spain told New Orleanians that they could no longer purchase French goods, but instead had to purchase Spanish goods. These goods included wine and brandy. One night a group of drunken locals gathered in Jackson Square to protest this proclamation, shouting, Give us back our Bordeaux; take away the poison of Catalonia. The leaders were rounded up and hanged, and New Orleanians quickly shifted their tactics from protest to smuggling. But the message was clear: We want to drink what we like and how we like.

This sensibility, with a focus on living the kind of good life that we want to live, defined the character of the town and drew like-minded people to come here. After Louisiana became part of the United States in 1803, Americans, or Kaintucks as they were called, floated down the Mississippi River on barges, lured by promises of riches in the bustling port city and fueled by jugs of whiskey they sipped en route. Once they arrived, they cut loose in the bars and bordellos that lined the river alongside the wharves. By the mid-nineteenth century, the city was seen as a place to party, a place where people danced at balls all night and drank at taverns well into the next day.
After the Civil War, the city’s businessmen tried to clean up the town in order to attract new industry. In a moment of surprising pragmatism, they acknowledged they could not actually eradicate vice, so they opted instead to contain it. Thus was born Storyville, named for Alderman Sidney Story, its creator. In 1897, a thirty-eight-block section of downtown New Orleans (including parts of the French Quarter and Treme neighborhoods) was cordoned off and zoned for legalized gambling and prostitution, activities inexorably connected with saloons and drinking. To no one’s surprise, the fortunes of Storyville soared, and its existence merely cemented New Orleans as a place where every manner of vice was gathered in one handy locale for your pleasure. Of course it wasn’t all vice. Out of this den of iniquity came jazz, which blossomed in the district as pianists and bands provided the soundtrack for everyone’s sins.

Storyville was shut down in 1917 at the request of the United States government, which worried that servicemen sent through the port on their way to serve in World War I were leaving the city with not only memories of good times but also venereal diseases. Its closure indirectly led to the creation of Bourbon Street as we know it today. Up to that point, Bourbon Street was merely another commercial street in the French Quarter, but when Storyville shuttered, many of the area’s clubs relocated to Bourbon Street, and, by the end of World War II, it became a thriving entertainment district.

By the twentieth century, New Orleans had become a traveler’s destination. Two key municipal decisions anchored New Orleans’s reputation as a place to cut loose: The first was a lack of closing times for bars, and the second was the legalization of open containers. Most cities require the party to end, but in New Orleans the lights can stay on all night. Furthermore, you don’t even have to be inside to do your drinking, which means the good times could literally roll up and down the street all night.

But the truth is, while these laws certainly enhance a visitor’s pleasure, ultimately they were not created for tourists. They were implemented in response to the citizens and the kind of life we want to create here. For example, most visitors think that open containers are only permitted on Bourbon Street, or in the French Quarter, but that is not the case. Unlike other cities that have created entertainment districts that permit open containers for a segmented portion of the city, New Orleanians can take their go-cups with them throughout the entire city. One of the pleasures of living in New Orleans is being able to come home after work, take your dog for a walk, and visit with your neighbors, all while sipping on the beer/wine/cocktail of your choice. The go-cup is ubiquitous across the city; it is one of our defining artifacts. 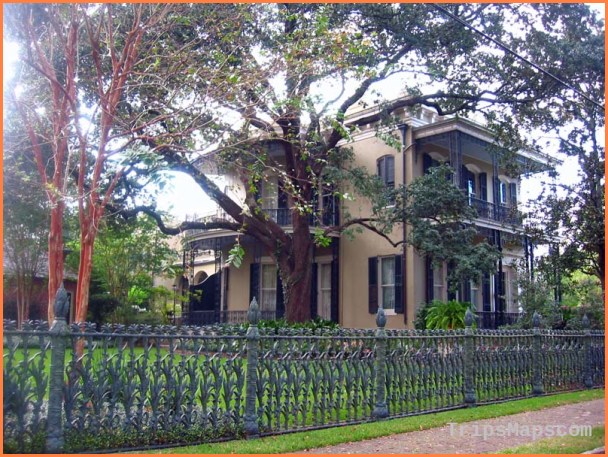 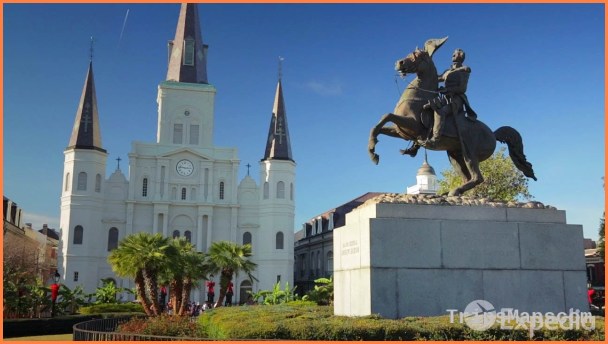 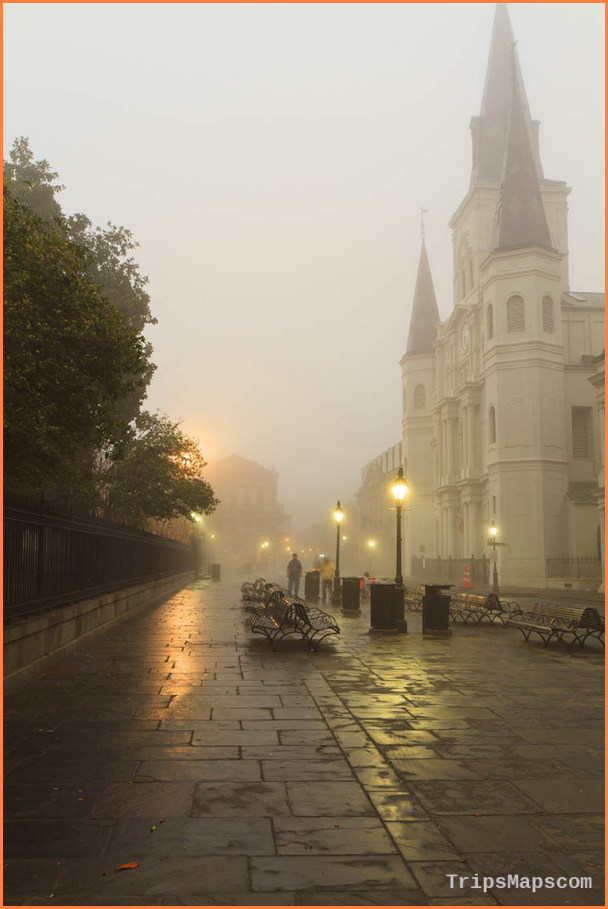 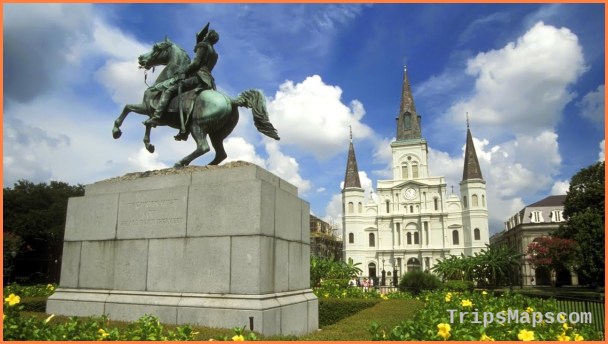 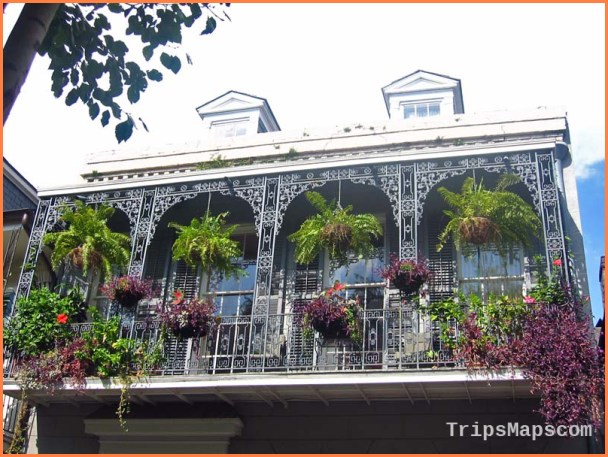 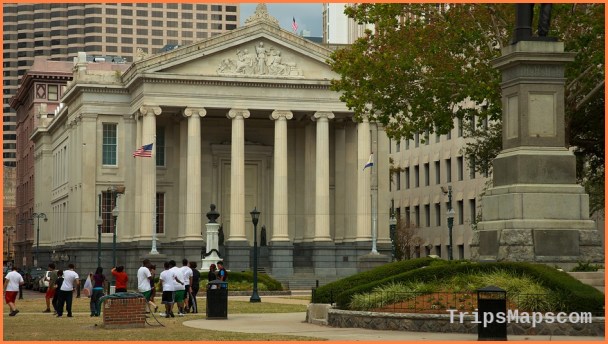 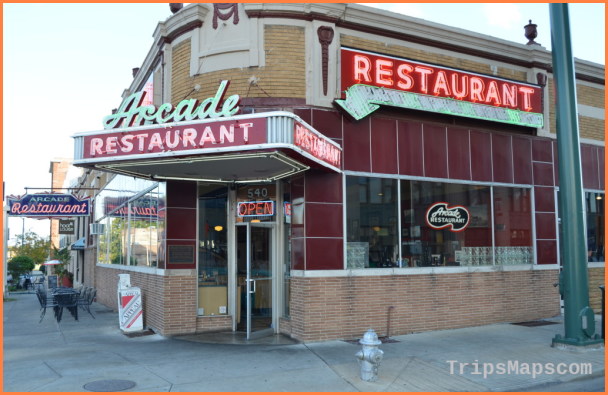