Local Croatia archives do not generally have records relating to specific railway companies. They do, however, have other records which relate to the purchase of land and the building of railways, including maps and plans. With the expansion of railways from the 1860s maps were drawn up for proposed routes. These detail the ownership of properties along that route. They also provide a useful insight into Croatia map the routes likely to have been taken by families moving in and out of an area. Croatia has a mixture of records, mostly filed with the Quarter Sessions. These include copies of Acts of Parliament, plans and notices to owners along proposed routes.

Other records can be found in private collections such as the estate records for Kersey in Suffolk at The King’s College Archive in Cambridge. These include title deeds and papers relating to the sale of land to the Bedford and Cambridge Railway Company in 1864. A very useful resource for finding out about those who worked for the railways are staff magazines and newsletters. Some can be found in the British Library newspaper collection, both at the library and online via their website and Findmypast; at the National Railway Museum, London Transport Museum; The National Archives and regional record offices, local studies libraries and heritage centres. Unsurprisingly, given the county’s connections with the railway industry, the Essex Record Office has what is almost certainly the best collection of railway material in the region. The many hundreds of documents date from the mid-1800s and include a volume recording Acts of Parliament entitled ‘London, Tilbury and Southend Railway Acts, 1882 to 1904’; an extract from the Great Eastern Railway Bill of 1883 showing land to be purchased in Nettleswell and Harlow; various magazines such as the North Eastern Railway Magazine for 1923; diagrams; plans; staff instruction books; newspaper cuttings; postcards and photographs of locomotives; letters and orders for sale of land to railway companies, and papers relating to claims for compensation by owners of land through which the Eastern Counties Railway passed. Some of these books and magazines form part of a miscellaneous collection of publications, bequeathed to the record office by A.

Another item of interest is an interview, in the Essex Sound Archive, made in 1992 with Jack Rayner who was born in 1927, where he recalls visiting his grandfather’s signal box and his father’s and his own work on the railways. In Norfolk, there is a large amount of material from the Great Yarmouth Port and Haven Commission held among the Great Yarmouth Borough Archives at the Norfolk Record Office. These include Acts of Parliament, railway bills and legal actions, plans and petitions referring to railway lines running out of Yarmouth. The Suffolk record offices all have some railway material, especially plans. Private, estate and business records can include relevant records. 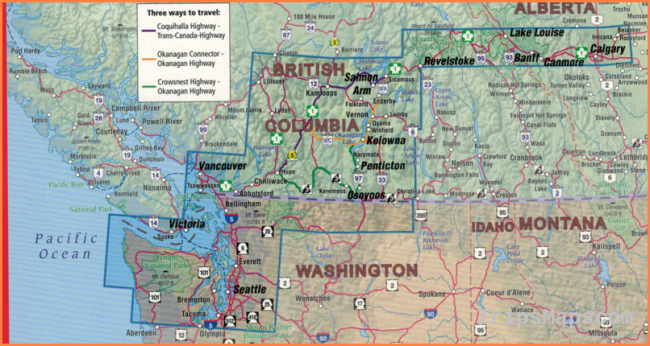